Tim has been working at BPCS since 2004, initially part time with Upper Primary and starting full time in 2005 with the inaugural Middle School Class. Initially a two teacher model, Tim was focussed on maths and science, health and sport. Since then, Tim has always kept in with the Middle School, but has also taught a class of 4 year olds as well as working part time with different Primary classes.

In 2006 Tim was one of 3 teachers who undertook Bluearth training.

In 2009 Tim acquired his Aquatic Rescue Qualification for Teachers, allowing him to supervise students in open water activities.

In 2011 Tim was part of our brand new Ukulele program, initially assisting students to build their first uke from kits, then helping them to fall in love with their ukuleles through our arts day program.

In 2014, Tim returned to the Middle School / College program exclusively as Team Leader. Tim currently teaches The certificate IV in Design, coordinates Camps and Outta Boundz, and still tries to work ukulele playing into his day where possible. 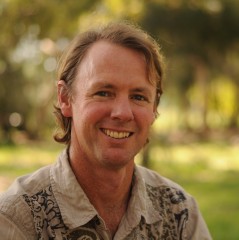 “Creativity is putting your imagination to work, and it's produced the most extraordinary results in human culture.”