Following the excitement of the College’s “Innovation Day” held in Term 3, overall winner Louis Riboni went on to represent Bold Park Community School at the State level competition. We are so pleased to announce that Louis was placed in the top 3 among representatives from 70 other schools in Western Australia.

Louis’ idea was to create “Fish-mate”: a device that filters microplastics out of the ocean. It was born out of his passion for fishing and noticing that the oceans were becoming more and more polluted. Louis’ concern for the impact this is having on fishing communities around the world prompted him to design a 3D printed prototype in an attempt to find a solution.

Facilitated through the Certificate IV Design program Louis was taken through the design process including; creating a design brief, production planning and development of a prototype. On gaining his qualification at the end of year 12 Louis will be able to enter into university or other higher education institutions. Louis hasn’t pinned down exactly what his pathway will be following school, but is deciding between Marine Robotics, Mechanical Engineering or the Navy.

Louis was presented with a Certificate of Merit for his achievement by the CEO of the Innovation Institute, Paul Litwin. Louis also received a place on a mentorship program where he will work with the Fisheries department to develop his idea further.

The “Right” To Do Difficult Things On Day 1 of our Reggio Tour, we had started to explore the... Read more

Our annual Community Breakfast was once again blessed with great company and good weather! Thank you for bringing your breakfast... Read more 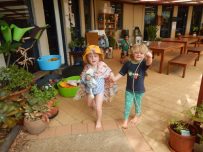 “...no learner can afford to be dependent on the teacher for everything that needs to be noticed, so teachers have to teach children to look for possibilities.”